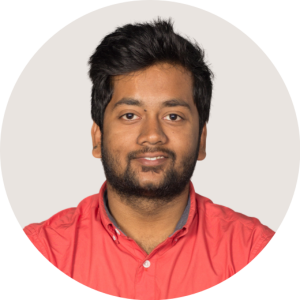 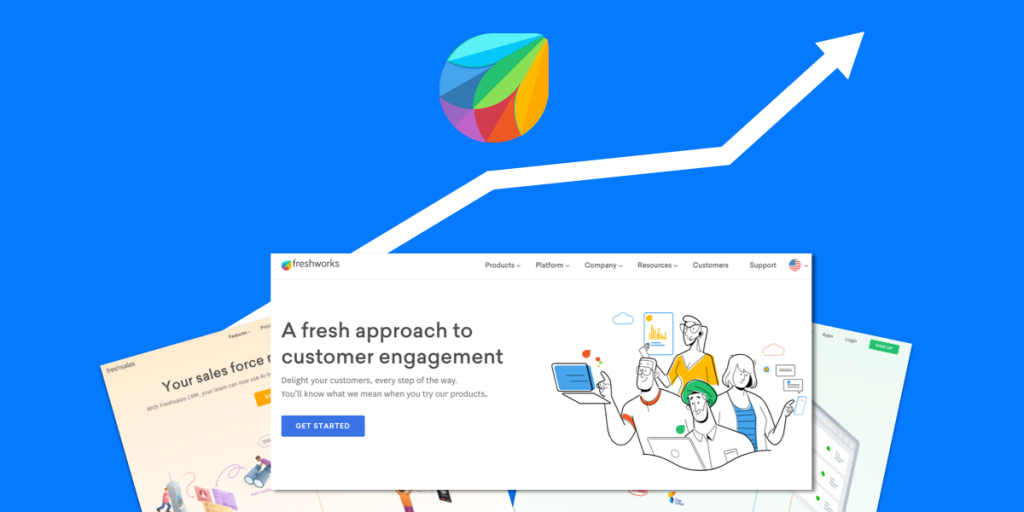 Before getting into this growth story, I’d like to give a shoutout to Chris Von Wilpert from Sumo for inspiring me to write this case study.

I’m a big fan of growth stories; probably you’re too. Whenever I come across such articles, I directly save it to my reading list on Pocket. It’s so amazing to learn the strategies, tools, and know the minds behind successful organisations.

However, something I hate is people gauging companies by the funding they’ve received or the number of employees (that’s lame), remember Instagram when they got acquired? I feel that’s the worst way to judge a company.

Zoho, for example, has raised 0$ in funding but still made $450M+ revenue in 2019. But being honest, we’ve all been guilty of doing this. You discover the real story only when you talk to the employees, especially the founding team.

Why no Indian SaaS growth stories?

There’s one question that I’m dying to ask the SaaS community – Why don’t we get to read Indian SaaS stories so much as funding news.

To change that today, I’ll share the story of Freshworks and highlight the marketing strategies they’ve used to become one of the largest SaaS startups in India.

While Freshworks is a popular name across the tech industry, let us start by uncovering the company’s history first.

Freshworks (previously Freshdesk) was started in 2010 by Girish Mathrubootham (an ex Zoho employee). Their first product was Freshdesk, a self-service solution for customer support. The tool turned out to be a great success. Within two years of existence, they managed to acquire more than 10k+ customers.

But their growth didn’t stop there; they went on to launch other SaaS products like Freshservice (2014), Freshsales (2016), Freshteam (2017) to add to their suite of tools. They’ve raised over $399 mn in funding by investors like Sequoia, Accel and Tiger Global. 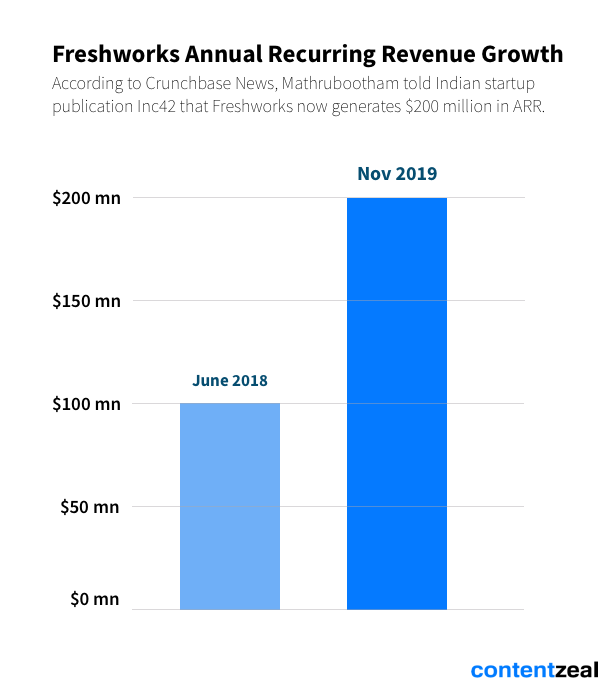 The company is currently valued at around 3.5$ bn and ranks 40th in Forbes Cloud 100 list. This makes Freshworks one of India’s largest software startups, along with Zoho. Overall they cater to over 150,000 businesses, including the likes of Honda, Cisco, and Toshiba.

Why it’s so interesting to learn the growth of Freshworks?

I know this question would be looming over your head – “Why Freshworks?“.

Apart from being a fanboy, I was very interested in understanding their marketing strategies. Most importantly, how they were able to attract 1.5 million monthly visitors to their website. Just for comparison sake, Chargebee attracts 708k visitors/pm, Kissflow 357k visitors/pm, and BrowserStack 838k visitors/pm.

But does it matter? Aren’t these just vanity metrics?

But in my opinion, it’s more than just traffic numbers; it’s about other aspects like –

This article aims to answers (hopefully) all the questions above and more.

In this article, I’ll throw light on some of their marketing strategies that fuel their growth every month. This below research is considering their journey till date. So let’s dive right in :

Salesforce is probably one of the leaders when it comes to cloud CRM. They have dominated the space for years, and they continue to do it, especially the enterprise market. They are also Freshworks’ biggest competitors (directly competing with Freshsales). I know Freshsales is nowhere near Salesforce in terms of features, but you get the point right.

You might have seen SaaS rivalries on Twitter, but on 25 Sep 2018, Freshworks took it to another level.

On the day of Dreamforce, SalesForce’s largest customer event, they gatecrashed and flew a blimp (saying #failsforce). The main idea was to tell people, stop paying for bloated software like Salesforce. People quickly took this to Twitter, and within a few hours, it resulted in hundreds of tweets and media coverage. They got featured by publications like Forbes, Adweek, and Techcrunch.

After the campaign’s success, they created a separate website to promote the campaign (they call it “Failsforce”). Since then, it has become a tradition now. They run the campaign every year during Dreamforce. Last Failsforce, they did a 2 hour live stream hosted by Parker Trewin from Freshworks and Nathan Latka. Freshworks is not alone, even Zoho had gatecrashed the Dreamforce before with pedicabs and food-trucks that advertised their push into enterprise software. 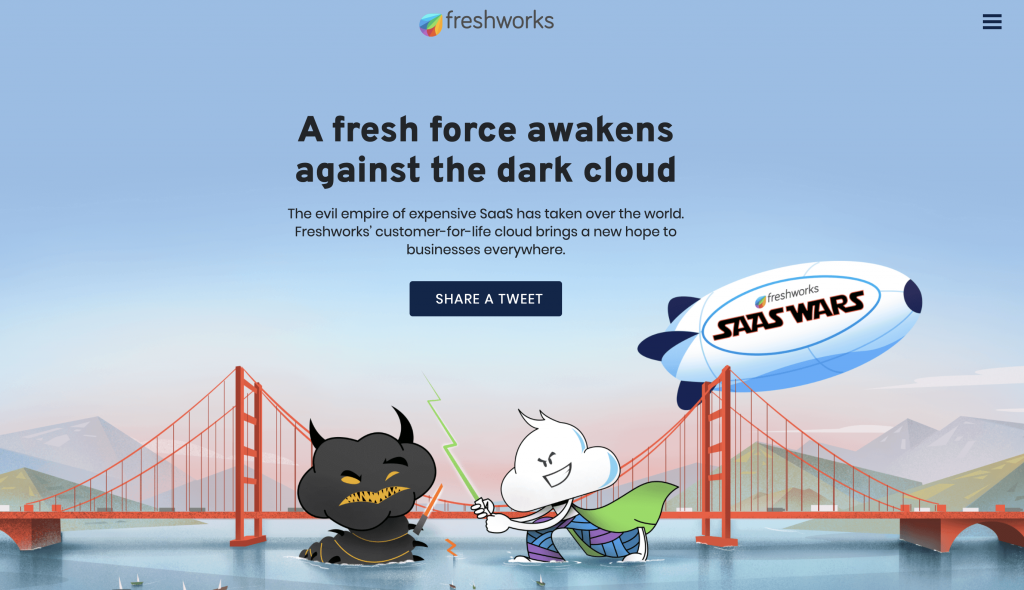 I don’t have the exact numbers, but I cannot imagine a better way of introducing your brand than flying a blimp on the day of your competitor’s biggest event. Kudos to the whole Freshworks team for pulling this off. It certainly requires great courage.

Influencer Marketing is the new buzzword across marketers. Everybody wants to include it in their funnel. According to a report by BigCommerce, “Nearly two-thirds of marketers increased their spending on influencer marketing 2019.” 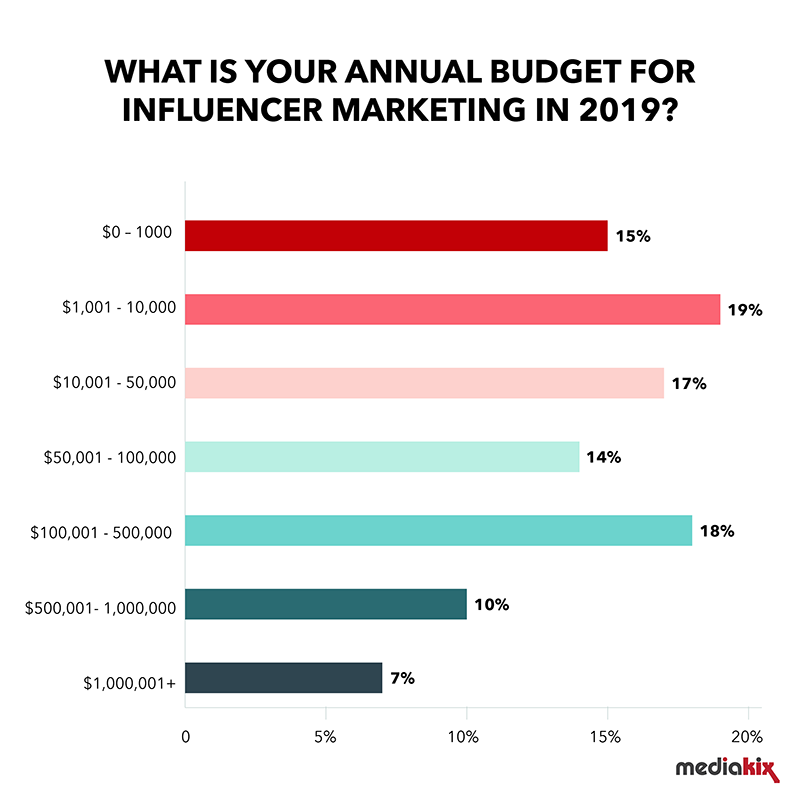 Webinars have been a crucial part of Freshwork’s brand awareness strategies. This is especially true for Freshsales and Freshcaller.

For Freshales alone they have conducted over 30+ webinars with industry experts like Rand Fishkin (founder of Moz), Patrick Campbell (CEO of ProfitWell), and Greg Holmes (Head of Sales, Zoom). 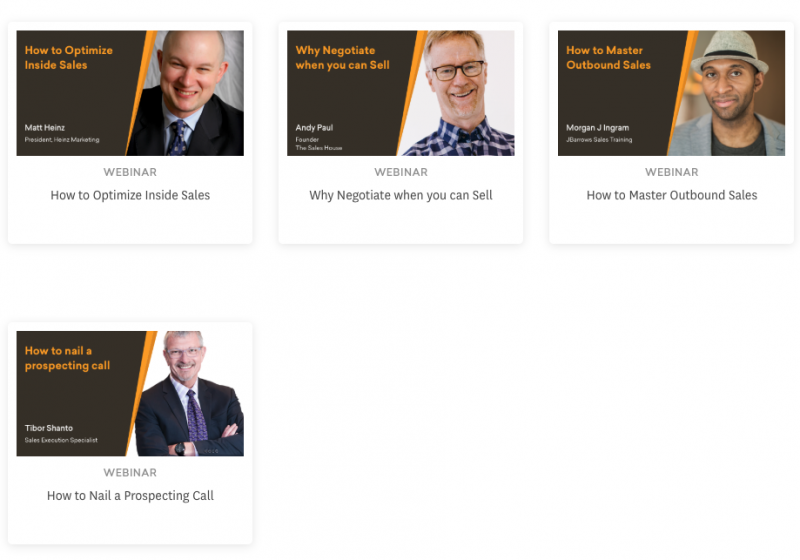 Apart from Freshsales, there were over 32 Webinars conducted in 2018 alone. Although I haven’t attended any of their webinars, it’s clear that they have an effective influencer marketing strategy in place. These has been crucial in building them a strong position globally.

Virtual summits are the new webinars. Most large SaaS companies are trying to leverage it for lead generation. 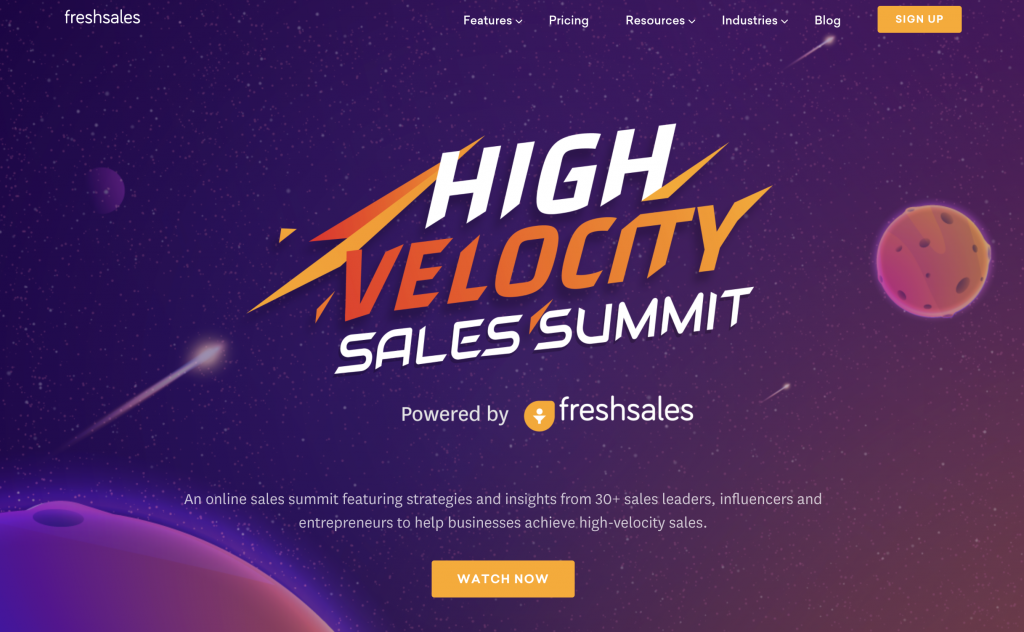 The promotion strategy used by them was something that caught my eye. Almost all the speakers posted a video on LinkedIn inviting people to catch them speaking. Even Freshworks’ employees were very creative in promoting the event. This helped them create a lot of buzz. For example, watch this video posted by Nivas –

We are super excited to be hosting our first ever High-Velocity online Sales Summit with 30+ entrepreneurs and sales leaders coming together to share best practices, insights, and lessons to help businesses.

The last event was the Experience Roadshow. Unlike other events, this was offline. It was conducted in 11 cities within 31 days. They brought many famous industry experts to speak around the latest trends in Customer Support, ITSM, and Sales.

With every company tapping into podcasts, Freshworks also jumped on the bandwagon in 2017. They host “Mind the Gap“, a podcast on growth, marketing, and customer experience. It is a mix of brand stories and interviews. There are over 43 episodes published now.

Ahrefs recently posted a case study covering the lessons they learnt after spending 51,975$ dollar on Podcast ads. It’s very interesting. But TL;DR podcasts are not effective for direct lead generation. 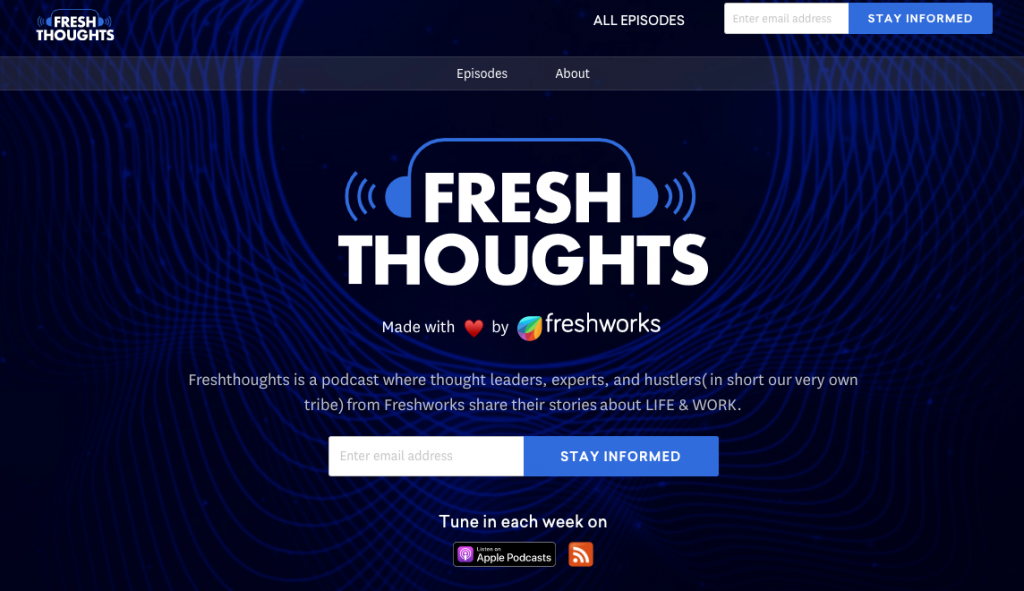 To understand more I connected with Abishek who is responsible for starting it and also the host. Here’s what he had to say – 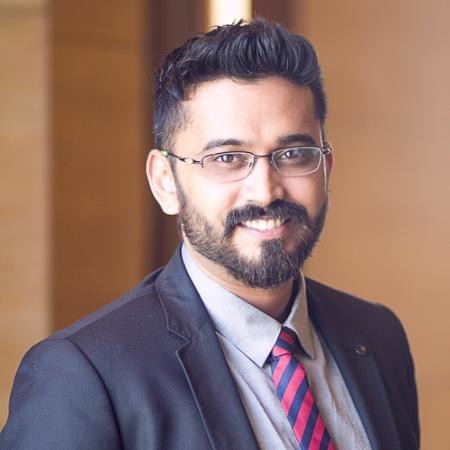 Over 60% of listeners are from the US. We started the podcast to tap on the SMB segment, and the funding news helped us get the perfect start. We created two podcasts around our funding, one globally and one in India.

One thing about podcasts is that it is a long haul.

We started seeing traction only after 4-5 months. As with any piece of content, we equally divide efforts into creating content and promotion.

Great content with no listeners is of no value.

Let me ask you a question.

What do you do before buying a product?

Ideally, you’d stack it up with the competition to find which one is the better choice for you. Right?

When you talk about buying a business tool, making the decision is even more difficult. Apart from comparison, you’ll also need to convince multiple stakeholders in your team.

To make it easy for customers to make a choice , they published multiple comparison pages for each of their products.

For example, their support product, Freshdesk, they  compared it with – 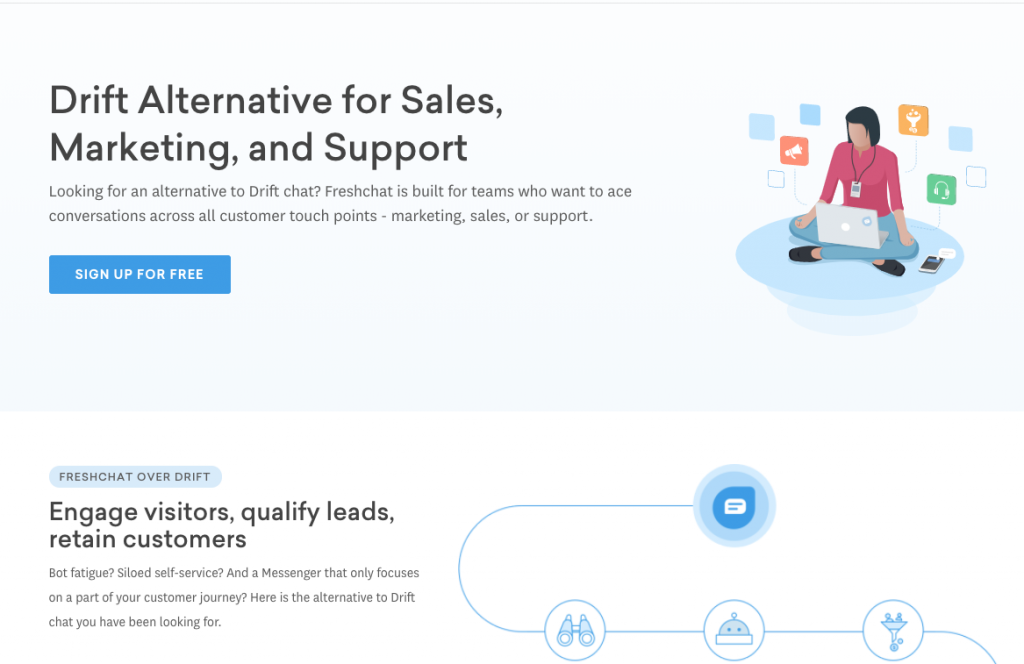 Screenshot of one of their competitor pages

You can use these pages in multiple ways, for example –

Overall it is a great strategy that every SaaS company should publish on their website.

Freshworks have been very consistent in producing high-quality content across their products. The content topics include informational posts, startup tips, book reviews and exhaustive guides. They also focus on creating collaterals like Infographics, E-books, and video case studies consistently for lead generation and sales enablement. 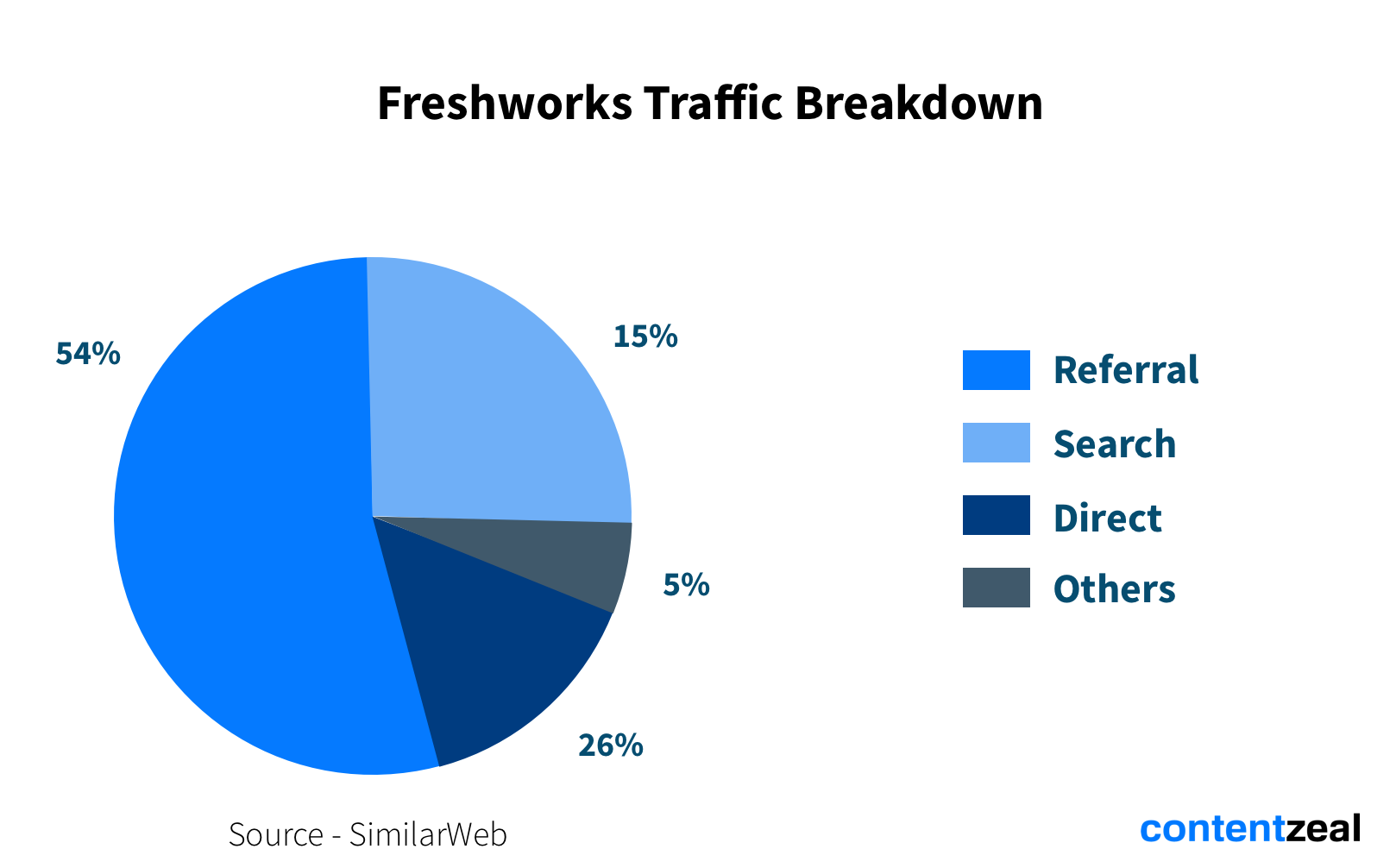 To understand better, I analysed the organic traffic for Freshsales. It receives about 23.5K organic visitors monthly (including resources and blogs). They rank for some popular keywords like “what is crm”, “sales cycle” etc. But a huge chunk of this traffic is through blog posts. 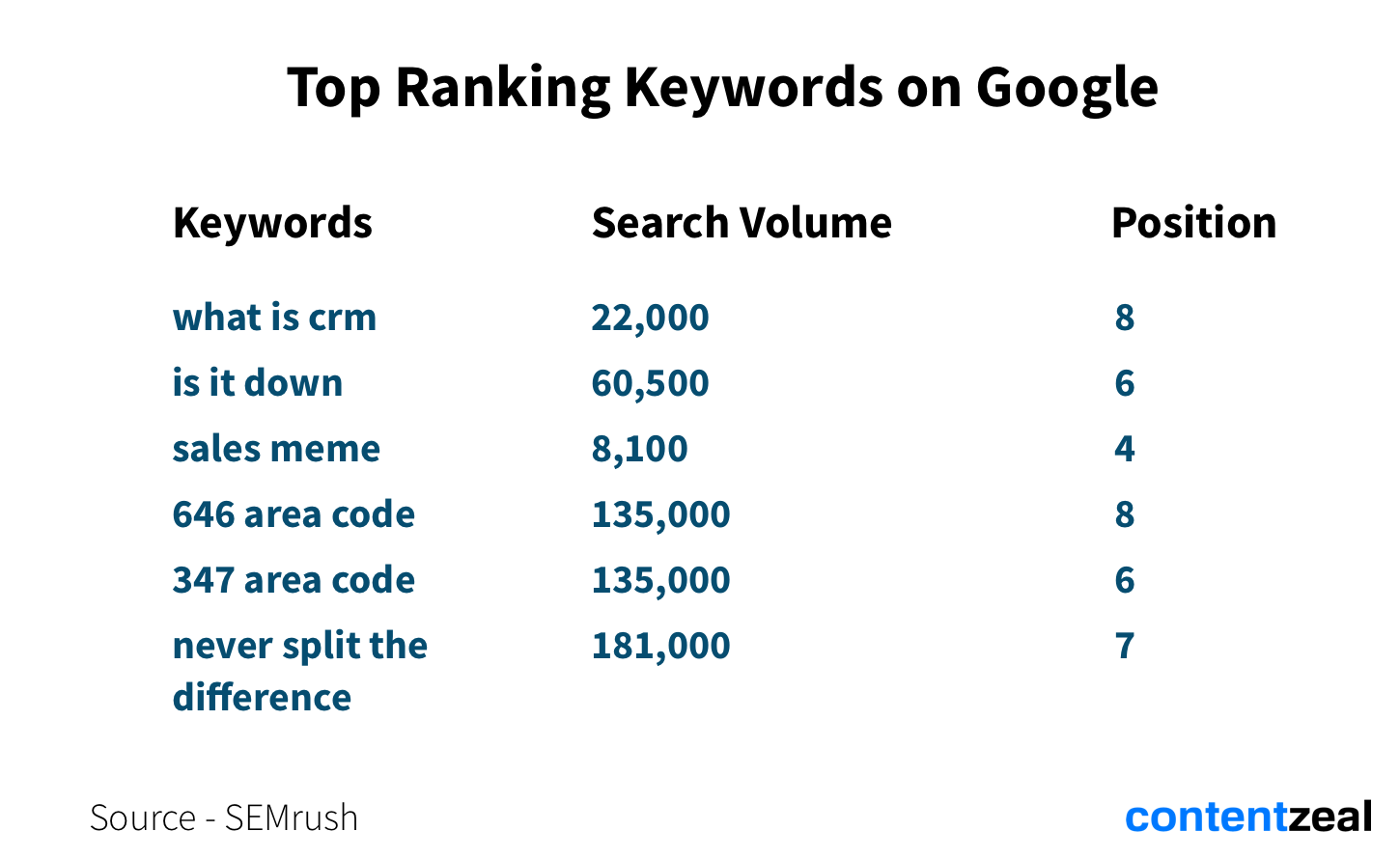 After speaking to multiple marketers regarding the content strategy, here’s what I understood –

1. Since they were late entrants to every market the first step was to understand their competitor’s successful content.

2. Their content pipeline was usually a mix of these pieces and few keeping their product roadmap in mind.

3. Every member of their marketing team were responsible to contribute content.

5. To capture blog subscribers they used exit-intent pop-ups with downloadables as content upgrade. This was very effective for growing their email subscribers. To engage with them, they sends out a weekly newsletter with the latest posts.

When it comes to SEO, Freshworks focused on – 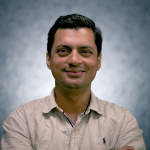 After a year after our launch, organic still remains Freshchat’s #1 source of acquisition and sales. As an example, we moved 10-points up in Google’s search engine results page (SERP) for several of the high volume keywords relevant for our product because we sharpened our top-of-the-funnel (TOFU) marketing.

#6. Leveraging the power of free tools

Developing free tools to drive traffic and generate new leads is not something new. Companies have been doing it for years.

CoSchedule’s Headline Analyser and Hubspot’s Signature Template Generator are great examples. The sole purpose of these tools is to attract more traffic, generate links and also to increase leads.

Freshworks also created free tools like Freshping and Freshstatus to fuel their traffic. To take a closer look at their strategy, I’ve taken the example of Freshping.

Freshping is a website monitoring tool. You just need to enter the URL you want to monitor, and they’ll send you an email when it goes down. In addition to this, you get access to a dashboard where you track the uptime of the website. 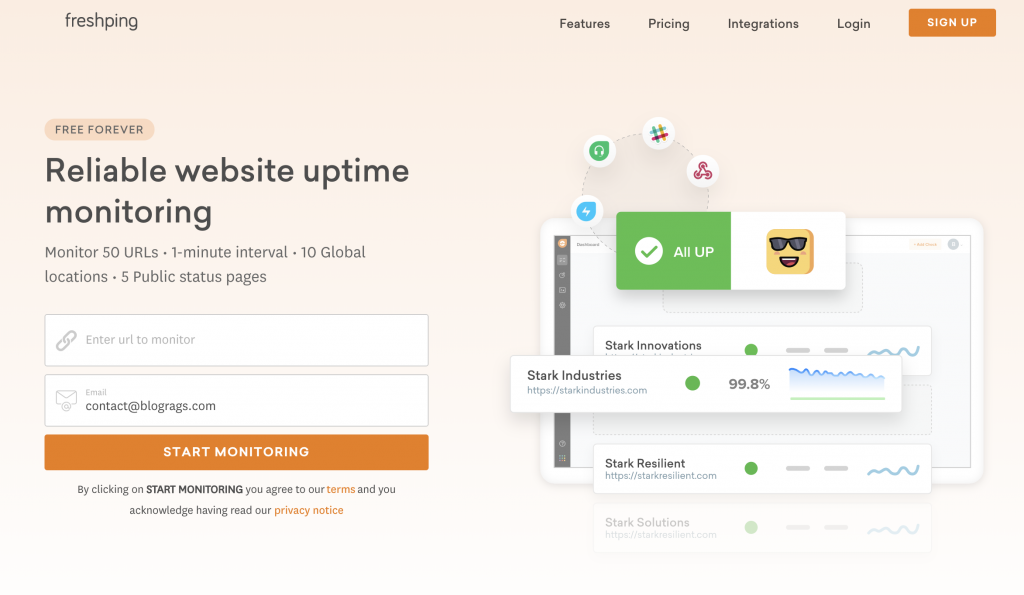 Once you sign up for the product, you’ll exactly understand the reason they’ve created it for – push their paid products.

It starts right from the email verification email 😮. Once you log on to their product, there’s a separate tab “Explore” that showcases their different products. 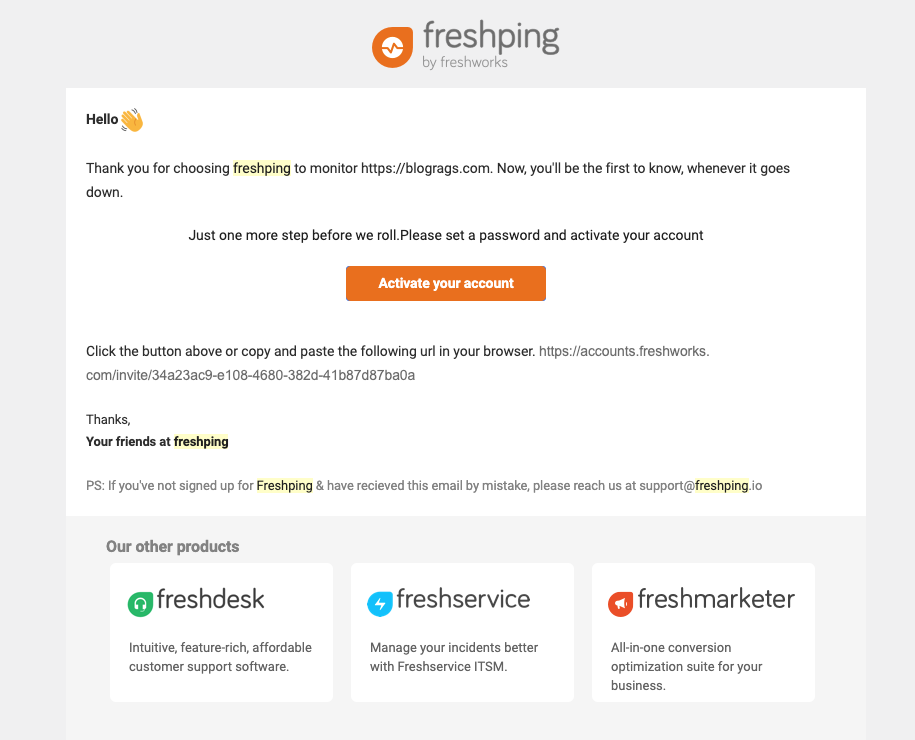 While Freshping might be a dead-simple idea, it has created quite the buzz for Freshworks. The product has been launched thrice on Product Hunt and here are some stats –

So did these products just create buzz on social media and communities?

No, it drives them organic traffic too.

According to Ahrefs, Freshping alone brings them close to 6K organic traffic monthly. It ranks for keywords like “isitdown” which has over 45,000 monthly search volume.

This tool alone has helped them to attract links from over 500+ referring domains. That’s huge.

Upon a bit of digging, I found that a lot of links are from the Freshping’s badge they offer once you sign up. Smart indeed.

That’s it from my side. In case I’ve missed something, please put it down in the comments.

I hope you enjoyed reading the article. I feel that Freshworks is a great company to follow, especially for marketers. Their out of the box marketing strategies have been crucial for their growth and inspiring other Indian SaaS companies.

Which SaaS company do you want me to cover next? Chargebee, Zoho, or Whatfix. Tell me by filling in this survey, no email required. 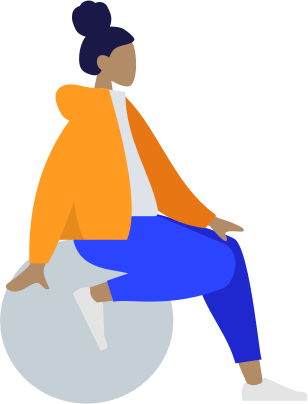 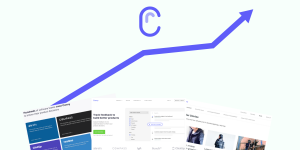 Himanshu Gupta
Himanshu is the founder of ContentZeal. He's been blogging for the better part of 7 years now. Follow him as he shares his experiences as a content marketer (currently at Skit.ai) through his in-depth blogs, stories and guides.
PrevPreviousElementor Review 2020 – The Good, Ugly and Bad
Next6 Content Marketing Lessons to Learn from Bootstrapped CannyNext